Did you know that hundreds of wedding bands are buried throughout our neighborhood?  It’s true!
When heading to work this morning, I encountered Mr. Ryan and some other men working on the new telephone poles on the corner of Central and 15th.  They took a few minutes to explain what they were doing, and to offer some words of wisdom for neighborkids.  Click on this video to see and hear what they had to say!
Wouldn’t it be neat if we could have conversations like this with all of the folks who spend time and energy working in our neighborhood?
Posted by Allison Pinto at 10:00 PM No comments:

For the past few months, I’ve been going to one of the two churches in our Central-Cocoanut neighborhood:  Payne Chapel A.M.E. Church on 19th and Central, which is four blocks away.  The folks of this church host lots of fundraisers to keep the church going strong, and today it was a seafood dinner, hosted by Ms. Adele up on Walker Circle.  Neighborkids Da’Sean and Dareeona drove over with Tim and me to pick up a couple of dinners. 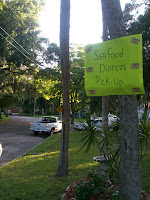 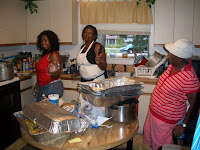 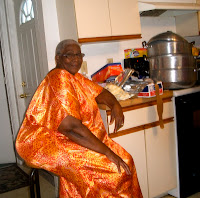 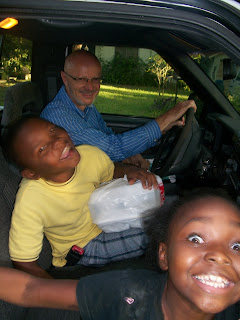 Amorie then joined us for an impromptu feast.  Crabs are a favorite food and special treat here on the block.  Though I’ve eaten crabs at earlier points in my life – back in college, and when my grandparents had a house on the bay at the Jersey shore – it’s been a while.  Amorie was especially entertained by the difficulties I was having getting the meat out of the claws.  Suddenly tables were turned, and I found myself being video’d by Amorie!   With a bit of consultation from the neighborkids, I soon was able to get to the good stuff.  Yummy. 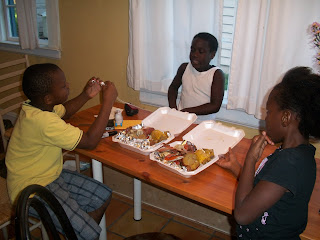 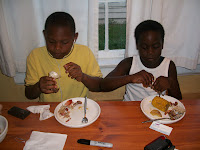 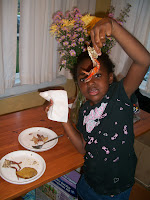 Posted by Allison Pinto at 10:00 PM No comments:

Amorie & the Happiness of Giving

The more we connect as neighbors, the more birthdays we seem to be celebrating on the block!  This weekend, neighborkid Amorie dropped by with a reminder that it soon will be his cousin Deandre’s birthday.  As we thought together about how to mark the occasion, Amorie pulled out a bag with small toys and favors like superballs, kazoos, and mazes in it.  Originally, this was a prize bag for neighborhood parties, but Amorie suggested that one or two of these prizes could be wrapped up for Deandre for his birthday.  On the heels of that idea, he suggested that for each neighborkid’s birthday, a couple of toys could be wrapped up as presents by fellow neighborkids, and then delivered to the birthday girl or boy as a surprise. 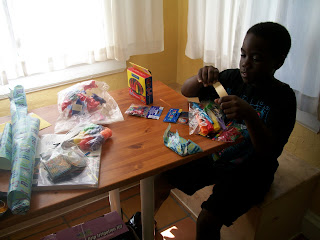 Amorie then picked out and wrapped a couple of toys for Deandre and placed them on the windowsill for Deandre to discover the next time he visits.  We’ll see what comes of this latest innovation! 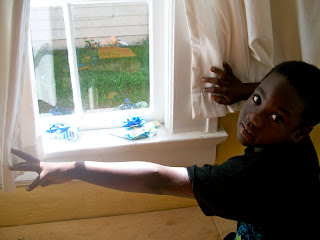 Amorie’s actions are a great example of how “Happier people give more and giving makes people happier.”  This is what folks at the Harvard Business School reported in the paper they published last year titled, “Feeling Good about Giving.”  Amorie was thrilled by his idea of giving presents to Deandre and his fellow neighborkids, and this idea grew out of delight, not out of feeling sorry for anybody.
What would it mean to follow Amorie’s example in a variety of ways here at La Casa Chica, and on the block in Central-Cocoanut?  Hmm…
Posted by Allison Pinto at 10:00 PM No comments:

Today I had an amazing opportunity to be a part of a special moment on the block.  Mr. Winton, who lives across the street, asked if I could give him a ride to Sarasota Memorial Hospital to pick up his wife and newborn son.  Wow – talk about an honor!  We got there and had a chance to visit with Nicole and little Jasper before they were discharged. 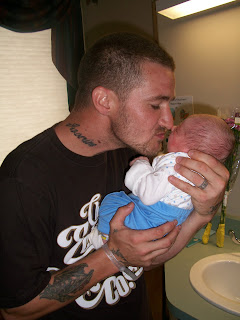 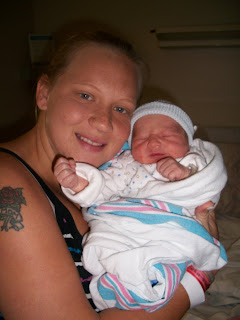 Then some of their relatives arrived, so Nicole decided that she and the baby would head home with them.  That gave us a few minutes to get back to Central-Cocoanut and tell Jasper’s sister Jasmine, brother Jaden, and fellow neighbors that the magical moment would soon be upon us!
When mom and baby arrived, neighborkids started jumping up and down with excitement, and then ran over to greet our newest little neighbor.  Here is a pic of a sacred moment on the block…Jasmine seeing her baby brother Jasper for the first time: 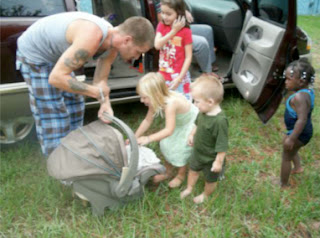 Neighborhood history in the making.
Posted by Allison Pinto at 10:00 PM No comments: