This afternoon, Gus and I needed to get out of the house for a while so we headed ten blocks down Central Avenue to a coffee shop in the Rosemary District – a place with outdoor tables, where I can write while we both enjoy the sun and breeze.

When we got there we ran into John, a fellow neighbor, who lives at Renaissance Manor on the other side of Mary Dean Park.  He has stopped by the house a few times to chat, but this was the first time we had a chance to talk for a while at the coffee shop. 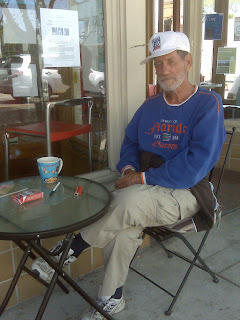 It turns out John is a great storyteller with a quick sense of humor, and he’s had some amazing life experiences.  He has two grand-daughters named MacKenzie and Lyric.  Lyric was born 2 days before the birthday of his wife, Carol, who died some years ago.  He says he notices many of Carol’s features in little Lyric – “she got Carol’s eyes, and her hair too.”
Although John took classes in social work, what he really loves doing is writing poetry.  He suggested that since he loves kids and also loves writing poetry, he’d love to teach the kids in our neighborhood how to rhyme and write poems.  I can’t wait to find out from our neighborkids whether this is something they’d get into – it seems like it could add a special, artistic dimension to our summertime neighborhood scavenger hunts (which will start up again in just over a month!)
While we were at the coffee shop, John followed through on a promise he made to us earlier.  When he bought a “detention Bible” at our recent yard sale, he told us he would write a poem about it.  Sure enough, before Gus and I left the coffee shop, we had received that poem, signed with the pseudonym “Arthur Unknown.” 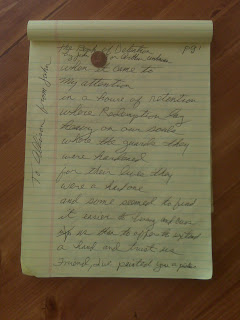 Here’s the poem:
The Book of Detention
by Arthur Unknown
When it came to my attention
In a house of retention
Where redemption lay heavy on our souls
Where the guards they were hardened
For their lives they were a hard one
And some seemed to find it easier to harangue and cuss us
Than to offer to extend a hand a trust us
Friend, I’ve painted you a picture
To help you see the mixture
Of the hate and some of the trouble
That often burst like a bubble
And found many a poor boy in lock-up
Where we often stayed to sun-up
Chained like a dog who was never given affection
Which brought on dejection
And times best forgotten.
But there in that house of Hell
God looked down and with a little hand
He did the deed
That old House of Detention shook
And today as I look
Back I wonder when we all might heal
Without the book
That set us straight
Released us from
Our common fate,
And with a little book
The House of Detention took
Us to the other side
So now you know how we discovered our neighborhood poet laureate.
Posted by Allison Pinto at 6:00 PM