Gardening Season is Upon Us

The season is upon us once again – gardening season, that is!  Neighbor Miss Joanna is a favorite among the neighborkids, as she’s always got a gardening project underway in her yard, and kids are welcome to help out and make a contribution.  The kids told me that in exchange, she secret-surprises them with special trips about town, like to get their nails painted, or to get ice cream, or… 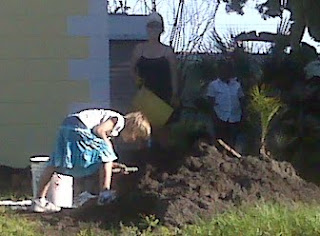